Yes, another middle manager in my organization has decided to part ways with my employer, Cisco Systems, Inc. Dave Corley has been a key part of Cisco since he was acquired along with the rest of Selsius in 1998. He’s now giving us a friendly handshake and showing himself out after just shy of 10 years service. His departure marks the loss of one more innovator from the team that literally created the voice business at Cisco, a business that now generates billions in revenue per year.

A Little Bit of History 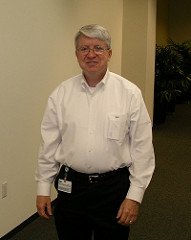 Dave didn’t spring fully formed from the brow of Zeus destined to become a father of VoIP. After graduating from the United States Naval Academy in 1975, he found himself at the Naval Postgraduate School writing Heat Transfer Analysis of a Rotating Heat Pipe Containing Internal, Axial Fins, still considered a classic by many. Submarines, not telephones, seemed to hold the key to his future.

A sterling career followed as Dave served as an officer on a trio of nuclear submarines, including the USS Hawkbill, USS Corpus Christi, and USS Parche, serving variously as engineering division officer, weapons officer, and navigation/operations officer, with a rank of Lieutenant Commander on his last two boats.

But all good things must come to an end. The USS Parche went into drydock for a multi-year renovation, and not long after that, Dave’s career in the USN came to its conclusion, retiring from active duty with as Commander. (Later upped to Captain while serving in the reserves.) However, unlike the Parche, which was decommissioned in 1994, Dave still had many years ahead of him, and he settled down in the Dallas suburbs and entered the telephony business.

After spending some time with the now defunct Voice Control Systems, Dave hooked up with the crew at Intecom that was to eventually be spun off as Selsius Systems under the leadership of Richard Platt and David Tucker. While at Intecom, Dave worked with Richard and others to develop what is arguably the first commercial VoIP phone system, an achievement that culminated with the purchase of Selsius by Cisco Systems, Inc. in 1998.

When Cisco bought Selsius, they got a company that had a working phone system, but it was not really ready for market. It was still too expensive to manufacturer, the infrastructure was not particularly scalable, and it had a long way to go before it was really managable by enterprise IT departments. There was a lot of work to do.

Dave rose to the task. As a product manager at Cisco, he shepherded Call Manager through several years of major releases, prioritizing features, haggling with development, marketing, and sales, and maintaining a vision that within just a few years, Cisco would own this voice segment.

You really can’t think of a less glamorous job than managing feature lists in a big company like Cisco. Life is an endless series of phone calls, meetings, small victories, and painful setbacks, with very few breaks for catching your breath. Dave oversaw the process of moving Call Manager from a single NT 4.0 server with an Access database to a distributed, redundant server farm using a replicated SQL database. He saw Call Manager progress from limping along with a couple of hundred phones to becoming a system that handles tens of thousands of phones inside Cisco. He worked through complex product integrations, like the deployment of Unity Voice Mail, another product line Cisco acquired around 2000.

When you look back on it today, it all seems inevitable. Cisco now owns the VoIP business, and went from a standing start to sharing leadership in enterpise telephony sales with Avaya. Back in the 90’s it would have seemed impossible for anyone to break into the tightly controlled PBX market, but VoIP opened the door, and Cisco charged in.

Dave’s part in all of this reminds me of the similar role of Lt. General Leslie Groves played in the Manhattan Project. Historians love to write about the enigmatic Robert Oppenheimer, but Groves is the one who oversaw the enormous effort required to get a gigantic bureaucratic enterprise on its toes and sprinting to a successful conclusion. Not glamorous work, but pivotal. In many respects, Dave was the Leslie Groves of Call Manager.

As Cisco’s VoIP business matured, I got the impression that Richard and Dave were becoming restless. My suspicions were confirmed in 2004 when Richard announced that he was creating a new group within Linksys (part of Cisco by then) to build a PBX targeted at the small business market. Apparently Richard and Dave weren’t familiar with Fitzgerald’s maxim that there are no second acts in American life.

The Linksys project was succesfully executed, with Dave in his familiar role, managing features, creating requirements documents, and convening the usual endless rounds of meetings. But unbeknownst to us all, there was trouble afoot.

It turns out that in 2007, Richard Platt reached the point of no return in his quest for job satisfaction. You could characterize Richard as an entrepeneur, or perhaps even a free spirit, but regardless, the constraints of a big company like Cisco apparently wore him down, and he exited on short notice.

Leaving Dave in charge of the group.

I’m not going to tell you that entering management at a company like Cisco is guaranteed to drive you stark, barking-dog mad. After all, there are people who take to it with relish - John Chambers seems both sane and happy.

But for some people, it can be a soul-crushing, stultifying existence - divorced from the reality of real work and instead enmeshed in an endless series of political battles, policy altercations, reeducation camps, and regular group recitals of the company song. I couldn’t take it, and at the same time I’m astonished to find that there are people who thrive on it. I’ve mentally divided humanity into two groups: us (people like me), and them (people who are attuned to management). I assume that we are of two different species.

Watching Dave’s experience as a manager at Cisco had me wondering: is he really one of us? He didn’t seem to be enjoying his new position as head of our engineering group. In the past, Dave’s level demeanor was a source of reassurance to me, now that demeanor seemed to have been turned down a notch or two.

My suspicions turned out to have a solid foundation in early May, when Dave announced that he was leaving. Word soon leaked out that he was joining Ripcode, a company that makes a video transcoding engine for the data center. (It’s kind of sad that companies today are restricted to naming themselves using the unregistered portion of the .com name space. Makes for some pretty strange monikers.) Dave knows a bit about building a company, and can no doubt help these guys get their feet on the ground and then go someplace.

Unfortunately, that leaves this ship without its captain.