Apple is in the middle of a minor fuss right now over their use of software updates as a promotional device. It turns out that if you are a Windows user with a copy of iTunes, Apple’s update process does its best to get you to install a copy of their web browser, Safari, along with whatever you need to keep your iPod humming along properly: 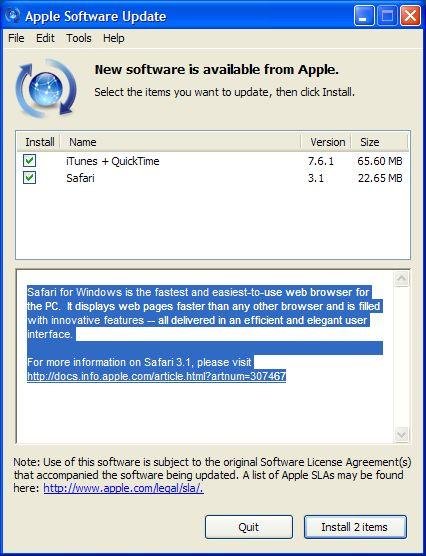 Of course, it’s not particularly unusual for companies like Google, Adobe, and Apple to try to sneak their software onto your system using somewhat deceptive practices. Last time I checked up on my Dad’s PC his browser had Google Toolbar, Yahoo Toolbar, AOL Toolbar, and a Toolbar from his ISP. The actual browser window was a miserable little ribbon a few hundred pixels high. Dad had no idea how the toolbars got installed, but I have no doubt they were all stealthily piggybacked on one piece of software or another.

But Mozilla CEO John Lilly seems to think this use of the update feature to promote a web browser goes beyond aggressive marketing and into the depths of evil. His angry blog post basically says that using an update/patch service to load new software violates some sort of basic compact between users and providers:

It’s wrong because it undermines the trust that we’re all trying to build with users. Because it means that an update isn’t just an update, but is maybe something more. Because it ultimately undermines the safety of users on the web by eroding that relationship. It’s a bad practice and should stop.

John goes on to say that he doesn’t condemn the common practice of using installed software to push your other products — he seems to be saying that the update program is a special case.

Things get really interesting when you start reading the comments to his post. As is often the case with All Things Apple, the issue seems to have caused extreme polarization. A selection of anti-Apple comments include:

This is disgraceful. It fails the user in favor of serving Apple. It is, in fact, malware-level tactics.

This is just a sick way of tricking users to download their browser by making it seem as if an update if available for a piece of software already installed. I bet it even takes over as the default browser afterwards, which would look very bad on Apple.

Right on, John Lily. “Update” means “update”, not “Give me your other products”.

But predictably, the Apple apologists insist that Cupertino can do no wrong:

You Windows users are not only paranoid, but so anti-Apple that your comments are hysterical. This is the biggest NON-ISSUE yet — and anyone using a computer that can’t use that screen and make a good decision should go back to a typewriter.

The consumer has already trusted Apple (or any company) by downloading one of their pieces of software already. There is already a placement of trust in Apple (or other company). If they trust Apple enough to install one of their apps, then extending that to another one of their programs seems to make sense to me.

Some of the complaints here are over the top. Pushing Safari with a iTunes update is “Malware”? Please. Sure, it’s marketing, but it is utterly benign, other than using a little disk space that is trivial by modern standards. Compared to all the real malware issues faced by Windows users, this is not worth notice. And, most of all, compared to the execrable practices of Microsoft and other PC software vendors, this is a tempest in a teapot.

I think one thing we can agree on is that there are tens of millions of Windows users with iTunes installed, and the vast majority of them are going to be clueless about what Safari is and whether they should uncheck that radio box. Does this mean Apple is preying on the ignorant? Are they in fact somewhat evil? Or is this just the way the world works now?

Use the comment box to let me know what you think. Inquiring minds want to know.

(By the way, I should note that in the past I’ve always used Firefox on OS/X - Safari 2.0 was lame, unstable, your basic piece of crap. I’m writing this on Windows using Safari 3.1, which is surprisingly fast and seemingly bug free. Quite an improvement!)