It’s still not clear whether electronic books are the wave of the future or a consumer products cul-de-sac. Technology continues to improve, and there are certainly lots of good reasons for a device like Amazon’s Kindle to be the leading edge of a major wave of adoption. A few of the more obvious arguments include:

But consumer acceptance is a fickle thing, so we don’t know if these rational arguments are going to fly. And of course, every writer who reviews a device like the Kindle or the equally capable Sony Reader feels compelled to write something along the lines of “But I just can’t imagine forgoing the pleasure of curling up on my couch with a good book.” I’m sure that when Gutenberg introduced movable type there were millions of industry reviewers posting notes to their blogs saying “The uniformity of the type is just esthetically unpleasing - I love it when I recognize the script of one of my favorite transcribing brothers.”

And then of course there’s the Steve Job’s money quote on the subject:

So it’s really pretty hard to be sure just which way this is going to go.

Looking Beyond The Reader 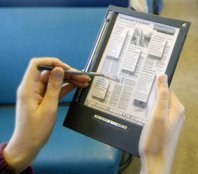 For electronic books to succeed, one thing is certain: the physical reading experience needs to match up well with the one we have right now for our printed media. In some ways this problem is already solved - readers like the products from Amazon and Sony are book-sized and lightweight, with displays that are doing their best to match the various good qualities of paper.

But there are still issues that need work. One of the most important is in the area of layout and markup. A presentation format such as HTML is designed to work with multiple display sizes, repositioning elements as needed. This doesn’t necessarily work so well with textbooks, magazines, etc., where graphic artists invest huge amounts of time and energy on positioning, font selection, and other esthetic issues.

Additionally, there is a staggering amount of material that is simply not in a format compatible with today’s electronic books. Even magazines being published today are not always ready for transfer to an eBook format, and there is of course a massive backlog of valuable material in the world that has never existed in digital format.

Into this void steps Robert Maxwell Case, who has developed a system called ReadAllOver, and is attempting to exploit it via his company, SeeAndBelieve.com. SeeAndBelieve.com has created a digital layout technology called ReadAllOver (the company seemingly has a love affair with awkward CamelCase constructions) that does a superior job of preserving the look of printed materials. The company web site gives a good demonstration of exactly what they are capable of doing - it is definitely worth your time to take a look.

I asked Robert if he could take the time to answer a few questions about ReadAllOver, and he was gracious enough to respond.

Mark Nelson: Hi Robert. I just recently became aware of your company, SeeAndBelieve.Com, and your imaging system, ReadAllOver. Before we get into the details of your technology, can you tell me a little bit about the history of your company? How long have you been at it? Are you working mostly solo or do you have some help? What kind of background do you have that got you into your current work?

Robert Maxwell Case: Sure, Mark. I come from a background of being a full-time musician and a part-time graphic designer. Around 1991-92, I was unhappy with then-current digital halftoning routines and began experimenting on my own. So I’ve been at it 15-plus years. 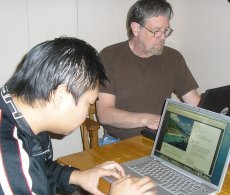 I’m not a programmer, so I have had a succession of programming assistants.
In recent years, they have come from my affiliation with the Computer Science department at Texas State University-San Marcos where I am a seven-year member of the Industrial Advisory Board. Currently SeeAndBelieve.Com, in addition to myself, has one full-time employee, Jimmy Kung, and several part-timers.

The first of my five U.S. patents (three issued, two pending) was filed in 1993 in response to some interest expressed by Steve Carlsen, developer of the .TIF graphics file format at Aldus (he’s now with Adobe Systems.)

MN: Can you give me a capsule summary of ReadAllOver? How does it differ from page layout systems like we see in web browsers or PDF viewers? Does it differ from the rendering systems used in Sony and Amazon’s current eBook readers?

RC: Well, ReadAllOver in a nutshell is a digital halftone-based graphics system suitable for eBooks. It renders on the screen a digital page with the “look and feel” of a printed page, with all included graphic elements, typography and images, placed precisely as the graphic designer intended. It differs from existing web browsers and .PDF viewers in that it relies less on text files and font metrics and instead places more emphasis on a simplified, highly-compressible bitmap image. In many respects, it is a “picture” of the page, with an ancillary text file.

The Sony and Amazon eBook readers are primarily text-based, offering a limited number of typefaces and few graphics. They both use the E-Ink subtractive screen and we think ReadAllOver’s halftone system can be tailored to enable a good fit with that screen.

MN: It looks like your technology emulates the halftone process used to render photographic images in newspapers and magazines. How does it improve on that process to achieve smaller file sizes? Do you have data showing the level of compression you get for specific images? And do you also render type as halftone images? That would seem a lot less efficient than treating type as marked-up text.

RC: That’s right, ReadAllOver does emulate the halftone process with one major difference, and that is that typography can be processed with it and not fall apart. 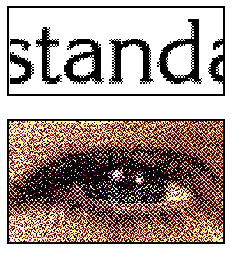 Samples of ReadAllOver output
(Detail may not be representative, images were resized)

We presently are comparing compression levels for specific images and plan to publish the results. So with typography, abrupt gray level changes such as font outlines fall on the black pixels of the interim checkerboard to render any font without reliance on font metrics or hinting. For example, ReadAllOver pages containing only typography are competitive in file size to marked-up systems, and with the additional attribute that our system is able to efficiently render any font, in any language, and any image, placed correctly. That’s exciting.

MN: I get digital delivery of some magazines already. For example, IEEE Spectrum is delivered using technology from Qmags. Do you think you can do a better job than they are already doing?

RC: Qmags has selected Adobe PDF as its preferred file format, so the comparisons I’ve made previously between ReadAllOver and PDF come into play here. Taking a quick look at Qmags’ file sizes, I would say that ReadAllOver is competitive and looks subjectively more “print-like.”

MN: Have you released any sample code or SDKs for people to work with your compression technology?

RC: Not at the present time … we have been too busy developing our prototype (you can see it at SeeAndBelieve.Com ).

MN: The idea of an electronic book reader has been floating around for a long time, but right now it seems like we’re finally seeing designs that are actually gaining some traction. There are still a lot of naysayers, however. What do you see in the future for the electronic book reader? Will it eventually do for reading what the iPod did for music? Or will it forever be a niche product that is stuck on the verge of popular success? And how hard will it be for you to get the manufacturers of eBook readers to adopt ReadAllOver?

RC: Mark, I do believe that an electronic book reader will achieve iPod-like popular success, and, hopefully, in the near-term. In my opinion, the more book-like the readers become, the closer we will get to that so-called tipping point. Then the public will recognize the added benefit of having access to any publication, including one’s own library, available whenever and wherever they desire. There are some of obstacles still to be overcome, like screen pixels that are pretty large, and wired and wireless transmission pipes that are pretty small.

I personally would like to see a reading device with 8-1/2” x 11” facing screens, about the size and weight of a coffee-table book, with graphics-intensive magazines and newspapers rendered on screen nearly indistinguishable from paper and ink. I certainly can imagine a college student not having to carry a backpack full of textbooks around campus.

Here’s my vision for our product: We’re hoping to make adapting to ReadAllOver as seamless and easy as possible. We envision three communities of ReadAllOver users:

We plan to provide each of these groups with a cost effective, easy-to-use solution. The ReadAllOver Viewer will be free for readers. They’ll read .RAO files on dedicated eBook devices, and most likely on other devices that could emulate a book-like reading experience. The inherent look and feel of printed material should reduce eye strain and, of course, we plan to offer such extras as page flipping, content search, printing, etc.

Publishers and booksellers will use ReadAllOver Publisher, our media content production system. They’ll be able to convert content from scanned material, as well as from existing editing and page layout systems and standards, including Adobe InDesign and FrameMaker, Quark XPress, MS/Office, Open Office, etc. (and, of course, we’ll include a .PDF to .RAO converter.) This community will appreciate a built-in high level of content protection with ReadAllOver’s emphasis on bitmaps. Hopefully they won’t need more, but if they do, our product should easily be able to incorporate additional encryption and DRM mechanisms.

We also plan to collaborate with eBook (and other display device) manufacturers in order to provide built-in support for the ReadAllOver rendering system. We feel we can efficiently adapt our system to display components with limited available grayscale and color levels. We also hope to offer a fixed-bit-rate option where every delivered page is the same file size.

Thanks Robert, this is all interesting stuff. I can see advantages to ReadAllOver that we don’t get from layout systems like PDF or HTML, so perhaps you will be able to hammer out an effective market position. I don’t have an eBook reader yet, but I think when the technology reaches the point where I can have a color Kindle I’ll probably jump on board. I’m almost there now, but since the Kindle is perpetually sold out at Amazon.com, my dollars are still safely in my wallet.