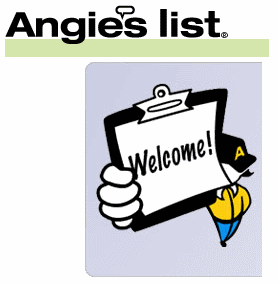 Angie’s List is a web site that allows consumers to see ratings on local service companies, such as plumbers, remodelers, electricians, and so on. All ratings are subscriber driven, and Angie’s List seems to make most of their revenue from the $5.95/month subscriber fee they charge - an anomalous revenue model in today’s web.

I subscribed to Angie’s List when in 2006 when I was in the midst of a batch of home projects, and found it pretty useful. When searching through the local ratings for a contractor or tradesperson in my area, I could usually find a least one or two highly ranked businesses, and they normally turned out to be as good as their ratings would indicate.

Angie’s List was useful, and provided a pretty good service for the price, but I finally dumped my membership this fall. Let me try to explain why.

Who Does Angie's Work?

Angie’s List really depends on subscribers actively contributing reviews - the collective knowledge of the base is obviously what makes the service tick. In 2006, as a good subscriber, I contributed several reviews during the course of the year, and didn’t think much of it.

But one thing kind of bothered me. Angie’s List is a for-profit operation, and they depend heavily on these user reviews. In fact, after entering reviews, I noticed that I started getting emails, and even a few phone calls encouraging me to submit more. But why bother? There’s no profit in it for me, just for Angie. I don’t get any kind of discount or even a thank-you for submitting those reviews. (Although in theory there is a drawing each month for a restaurant gift certificate, the actual value of that must be pennies or less on each review.)

But at the end of 2006, Angie had a nice incentive to submit reviews. Every reviewer that submitted more than 15 reports in the month of October got a free digital camera. I was able to go back over the year and come up with 20 additional submissions, and in exchange I got a camera which I was able to use as a Christmas gift.

So far so good. Angie was making use of my reviews, even printing one of them in the service’s monthly magazine (which I only stumbled upon by accident - Angie couldn’t be bothered to send a thank-you or a heads up) and I was getting some minor compensation for being a frequent submitter.

This year, rather than submit any reviews, I decided to wait for the October drive so I would get some compensation for my work. To my surprise, Angie got cheap. Instead of giving everyone a decent reward, each submission in the October driver simply garnered an entry in a drawing for a Smart Car. Sounds good, right? But it’s a nationwide drawing, and while Angie didn’t publish actual numbers, I have reason to believe there were over 25,000 entries competing for that prize.

So the 2006 reward was worth at least $5 for a review, but in 2007 the value was down to less than $1, and the payoff was a gamble. Since the reviews are the only thing that gives the site any value, it’s surprising that Angie would suddenly get so cheap.

What’s even more strange is that Angie’s List, like any venture of this sort, has a subscriber base that is probably mostly passive. I would venture to say that 95% of the subscribers submit one or fewer reviews per year, and only a few are active contributors. Failing to reward those active contributors in some way, while happily making money off their contributions, only serves to annoy them.

Well, maybe it doesn’t annoy all of them, but it made me feel like a chump. I certainly quit submitting reviews - why bother?

After getting bugged again for more reviews, I told the company honestly why I wasn’t contributing, and got this response:

We always appreciate our members who contribute and hope that they would be happy to do so simply as a means of sharing honest feedback and not necessarily in hopes of being rewarded.

Does Angie’s List operate their web site simply as a public service, with no hopes of being rewarded? Of course not, it’s a business. Is their some good reason I should feel like contributing to their success just to get a warm feeling in my tummy? No, sorry.

The Icing On the Cake

The final straw came when Angie’s List sent me an offer in September of this year. I was being given the privilege of buying gift memberships that I could give to friends and family, at a discounted rate: exactly half of what I pay for my membership.

Could I buy one of these gift memberships for myself and use it as a renewal? No, of course not. They already have my subscription, and so why should they give me an offer like this? This is only so they can build their subscriber base.

To me it comes off as a slap in the face. You’ll give a new subscriber the same product at half price, but your existing, loyal customer, gets no discount of any sort.

That was the last straw. I did a little research on a few home projects I’ll be doing over the next few months, collected the reviews, then dropped my subscription. It was only $60/year, but I felt like Angie was playing me for a chump, and it was time to move on.

Bye Angie. Honest, it was me, not you.