Toshiba makes a lot of stuff. You’ve seen their computers, their TVs, phone systems, and maybe, like me, you’ve been lucky enough to be the owner of some their batteries .

When I purchased a halfway-decent Schwinn exercise bike a few years ago, it came with prepackaged Toshiba batteries to operate the controller, and of course I popped them in right away. I operated the bike on an AC adaptor most of the time, so the batteries probably weren’t getting much use. On the most recent occasion I had to use the batteries, the controller wouldn’t fire up, which I attributed to the batteries being dead. Time to replace them! 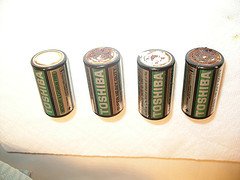 Look at the beauties I pulled out of the bike! Despited being kept at room temperature inside for a couple of years, these carbon-zinc batteries crapped out and rusted right out of their shells. 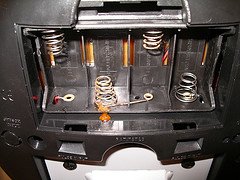 As you can see, its not just a matter of a little rust on the case, they also oozed all over the battery container, which fortunately is mounted downhill of the controller board. The springs that hold the batteries in place are now little rust-loaded death traps waiting to set in motion oxidation on anything that is placed inside that case in the future. 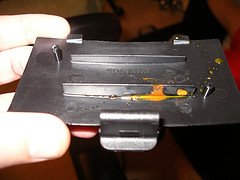 While the controller board isn’t ruined, I’m not sure I’ll be able to put batteries back in the container without setting up another spontaneous meltdown, this time from the outside. Replacing the battery container looks pretty easy, although it would require just a bit of soldering.

The good news in all this is that Schwinn probably saved at least 25 cents by being off-brand batteries instead of something decent, helping the bottom line and preserving American jobs. Go Schwinn!