Note: Thanks to Shawn McGee for pointing out an error in Figure 1. The print edition of this article in C/C++ Users Journal had an unfortunate extra line!

My daughter’s math teacher at Hockaday School in Dallas wants his sixth-grade students to enjoy their class. He’s fond of sending home interesting problems that are meant to be both entertaining and enriching. As most parents probably know, this can only mean trouble!

Last week Mr. Bourek sent home a worksheet containing a set of variations on the traditional magic square. Students were given various shapes, such as triangles, stars, and so on, and asked to fill in a set of consecutive numbers at the vertices. The goal was to come up with an arrangement of numbers such that various rows, columns, and diagonals all added up to a given sum.

Kaitlin worked her way through most of the problems in fairly quick order. But the shape shown in Figure 1 managed to stump her. 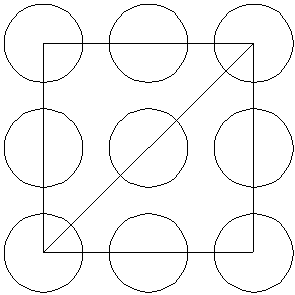 The problem was simple enough. All she had to do was place the numbers 1 through 9 in the nine positions of the figure so that the sum of all the straight lines was 17. Although Kate was able to knock the other problems out quickly, this one was still unsolved after fifteen minutes or so; well past the normal sixth-grade attention span.

Even worse, after another 10 minutes of my help we were no closer to a solution. That’s when I decided it was time for a brute force approach. I remembered that the standard C++ library had a handy function, next_permutation(), that would let me iterate through all the possible arrangements of the figure with just a couple of lines of code. All I had to do was check the five different sums for each permutation and I’d have the answer in no time.

The resulting program is shown in Listing 1, and its output is given below:

A little quick sketching will show you that the four solutions are simply rotations and mirror images of the one true solution. You can also see that randomly putting down numbers makes the odds almost 100,000:1 against finding a solution. Not quite as bad as the lottery, but it clearly shows that random guessing isn’t going to work. (My daughter asked me to give her the center position only, upon which she solved the rest of it in roughly 30 seconds.)

From this program you can see that next_permutation() is a handy function to have in the C++ library. In my case it meant the difference between writing an impulse program versus fiddling around with pencil and paper for another hour. What really makes next_permutation() interesting to me is the fact that it can generate permutations without keeping any additional information beyond the sequence being juggled. I can generate a permutation, go off and do whatever I like with it, even write the numbers out to a file and save them for later. Regardless of what I do, next_permuation() will always be happy to generate the next set in the series given only the previous one as input.

Using the string class in the C++ standard library makes it fairly easy to implement this logic. Listing 2 shows permute.cpp which implements this algorithm relatively faithfully.

This approach to generating permutations is okay, but its recursive nature makes it unattractive for use in a library. To use this in a library we would have to employ a function pointer that would be invoked from deep inside the chain of function calls. That would work, but it’s definitely not the nicest way to do it.

next_permutation() manages to avoid this trouble by using a simple algorithm that can sequentially generate all the permutations of a sequence (in the same order as the algorithm I described above) without maintaining any internal state information. The first time I saw this code was in the original STL published by Alexander Stepanov and Ming Lee at Hewlett-Packard. The original code is shown in Listing 3.

Listing 3 - Function next_permutation() from the STL

Using this function is simple. You call it repetitively, asking it to permute a given sequence. If you start with a sequence in ascending order, next_permutation() will work its way through all possible permutations of the sequence, eventually returning a value of false when there are no more permutations left.

You don’t need to be an STL expert to understand this code, but if you’ve never been exposed to this new part of the C++ standard library, there are a few things you need to know.

First, iterators (and the BidirectionalIterator type used here) are an STL abstraction of pointers. When looking at this code you can mentally think of the iterators as pointers. The permutation sequence is defined by iterators first and last. first points to the first element in the sequence, while last points one past the last element.

To help illustrate the workings of this algorithm, I’ve included a listing of a permutation sequence in Figure 2. It contains all 120 permutations of a five digit sequence. With that output example, plus Listing 3, it is fairly easy to see how this code works.

The function first does a cursory check for sequences of length 0 or 1, and returns false if it finds either. Naturally, sequences of those lengths only have one permutation, so they must always return false.

After passing those tests, the algorithm goes into a search loop. It starts at the end of the sequence and works its way towards the front, looking for two consecutive members of the sequence where member n is less than member n+1. These members are pointed to by iterators i and ii respectively. If it doesn’t find two values that pass this test, it means all permutations have been generated. You can see this is the case in Figure 2 for the very last value, ‘54321’.

Figure 2 - A sequence generated by next_permutation(a)

Once iterators i and ii have been properly located, there are still a few more steps left. The next step is to again start searching from the end of the sequence for the first member that is greater than or equal to the member pointed to by i. Because of the previous search for i and ii, we know that at worst the search will end at ii, but it might end earlier. Once this member is located, it is pointed to by iterator j.

Once these three iterators are located, there are only two more simple steps. First, a call is made to iter_swap( i, j ). This simply swaps the members pointed to by i and j. Finally, a call is made to reverse( ii, last ). This has the effect of reversing the sequence that starts at ii and ends at the end of the sequence.

The end result is a routine that is short, simple, and runs in linear time. You really can’t ask for much more than that.

Walk through an example

For a quick look at the algorithm in action, consider what happens when you call next_permutation("23541"). After passing through the initial size tests, the algorithm will search for suitable values for iterators i and ii. (Remember that you are searching from the end of the sequence for the first adjacent pair where the value pointed to by i is less than the value pointed to by ii, and i is one less than ii.) The first pair of values that meet the test are seen when i points to 3 and ii points to 5. After that, a second search starts from the end for the first value of j where j points to a greater value than that pointed to by i. This is seen when j points to 4.

Once the three iterators are set, there are only two tasks left to perform. The first is to call iter_swap(i,j), which swaps the values pointed to by the iterators i and j. After you do this, you are left with the modified sequence “24531”. The last step is to call reverse( ii, last ), which reverses the sequence starting at ii and finishing at the end of the sequence. This yields “24135”. Examining Figure 2 shows that the result demonstrated here does agree with the output of the program.

When I run this input set through a set of calls to next_permutation(), I see the correct output:

The STL algorithm, on the other hand, actually performs comparisons of the elements that it is interchanging, and uses their relative values to determine what interchanging will be done. In the example from the last section, you saw that an input of “24531” will generate a next permutation of “24135”. What if the string had a pair of duplicates, as in “24431”? If the algorithm were ignorant of character values, the next permutation would undoubtedly be “24134”.

The subsequent swap operation yields “34421”, and the reverse function produces a final result of “31244”. Remember that the algorithm works by progressively bubbling the larger values of the string into position 0, you can see that this permutation has already jumped well ahead of the permutation of “24531” on its way to completion. Thus, the algorithm “knows” how to deal with duplicate values.

The addition of the STL to the C++ Standard Library gave us a nice grab bag of functions that automate many routine tasks. next_permuation() turned out to be just what I needed to solve a sixth grade math problem. It might be time for you to look through the declarations in the algorithm header file to see what else standards committee laid on our doorstep.