Free software is like pizza - when it’s good, it’s very good. When it’s bad, it can still be pretty good. This article takes a look at zlib, the free data compression library written by Mark Adler and Jean-loup Gailly. Like the very finest pizza, zlib is exceptional.

In this article I will first give a quick overview of what zlib is, and where it came from. I’ll then discuss the existing interface, and look at the wrapper class I created for my own use. Finally, I’ll talk about how I integrated zlib into a a command line test program and a general purpose file compression OCX. After reading this article you should feel comfortable using zlib for many, if not all, of your data compression needs.

I recently received an email message from Scott Steketee, a developer of The Geometer’s Sketchpad, an educational/visualization tool:

Do you know of a product which can be used in place of the Windows files compress.exe and expand.exe in such an installation? It’s obvious even to me that the compression achieved by the standard Windows programs is not very good, and I imagine I could keep the current number of disks just by improving the ratio somewhat.

I frequently see messages similar to this in Internet newsgroups like comp.compression and comp.lang.c, or on various CompuServe forums. It seems that the requirement to efficiently compress or expand files is a fairly common one. Often, programmers find that their needs aren’t being filled by the Windows API functions in LZEXPAND.DLL (no compression functions), and don’t want to spend the money needed for third party solutions, such as Greenleaf’s ArchiveLib.

Fortunately, I’m able to point Scott towards an excellent solution to his problem: zlib. zlib is a library of C routines that can be used to compress or expand files using the same deflate algorithm popularized by PKZIP 2.0. zlib is efficient, portable, and free.

A Brief History of zlib

The origins of zlib can be found in the history of Info-ZIP. Info-ZIP is a loosely organized group of programmers who give the following reason for their existence:

Info-ZIP’s purpose is to provide free, portable, high-quality versions of the Zip and UnZip compressor-archiver utilities that are compatible with the DOS-based PKZIP by PKWARE, Inc.

These free versions of Zip and UnZip are world class programs, and are in wide use on platforms ranging from the orphaned Amiga through MS-DOS PCs up to high powered RISC workstations. But these programs are designed to be used as command line utilities, not as library routines. People have found that porting the Info-ZIP source into an application could be a grueling exercise.

Fortunately for all of us, two of the Info-ZIP gurus took it upon themselves to solve this problem. Mark Adler and Jean-loup Gailly single-handedly created zlib, a set of library routines that provide a safe, free, and non-patented implementation of the deflate compression algorithm.

One of the driving reasons behind zlib’s creation was for use as the compressor for PNG format graphics. After Unisys belatedly began asserting their patent rights to LZW compression, programmers all over the world were thrown into a panic over the prospect of paying royalties on their GIF decoding programs. The PNG standard was created to provide an unencumbered format for graphics interchange. The zlib version of the deflate algorithm was embraced by PNG developers, not only because it was free, but it also compressed better than the original LZW compressor used in GIF files.

zlib turns out to be good for more than graphics developers, however. The deflate algorithm makes an excellent general purpose compressor, and as such can be incorporated into all sorts of different software. For example, I use zlib as the compression engine in Greenleaf’s ArchiveLib, a data compression library that work with ZIP archives. It’s performance and compatibility mean I didn’t have to reinvent the wheel, saving precious months of development time.

As a library developer, I know that interfaces make or break a library. Performance issues are important, but if an awkward API makes it impossible to integrate a library into your program, you’ve got a problem.

zlib’s interface is confined to just a few simple function calls. The entire state of a given compression or decompression session is encapsulated in a C structure of type z_stream, whose definition is shown in Figure 1.

Using the library to compress or decompress a file or other data object consists of three main steps:

An overview of the process is shown in Figure 2.

Figure 2 — The general flow of a zlib session

Step 2 is done via repeated calls to either inflate() or deflate(), passing the z_stream object as a parameter. The entire state of the process is contained in that object, so there are no global flags or variables, which allows the library to be completely reentrant. Storing the state of the process in a single object also cuts down on the number of parameters that must be passed to the API functions.

When performing compression or decompression, zlib doesn’t perform any I/O on its own. Instead, it reads data from an input buffer pointer that you supply in the z_stream object. You simply set up a pointer to the next block of input data in member next_in, and place the number of available bytes in the avail_in member. Likewise, zlib writes its output data to a memory buffer you set up in the next_out member. As it writes output bytes, zlib decrements the avail_out member until it drops to 0.

Given this interface, Step 2 of the compression process for an input file and an output file might look something like this:

This method of handling I/O frees zlib from having to implement system dependent read and write code, and it insures that you can use the library to compress any sort of input stream, not just files. It’s simply a matter of replacing the wrapper code shown above with a version customized for your data stream.

zlib's versatility is one of its strengths, but I don’t always need all that flexibility. For example, to perform the simple file compression task Scott asked about at the start of this article, it would be nice to just be able to call a single function to compress a file, and another function to decompress. To make this possible, I created a wrapper class called zlibEngine.

ZlibEngine provides a simple API that automates the compression and decompression of files and uses virtual functions to let you customize your user interface to zlib. The class definition is shown in its entirety in Figure 4. There are two different groups of members that are important to you in ZlibEngine. The first is the set of functions providing the calling interface to the engine. The second is the set of functions and data members used to create a user interface that is active during the compression process.

The wrapper class makes it much easier to compress or decompress files using zlib. You only need to remember three things:

This means you can now perform compression with code this simple:

That’s about as simple as you could ask for, isn’t it?

The calling API doesn’t really make much of a case for creating the ZlibEngine class. Based on what you’ve seen so far, the compress() and decompress() functions don’t really need to be members of a class. In theory, a global compress() function could just instantiate a z_stream object when called, without the caller even being aware of it.

The reason for creating this engine class is found in a completely different area: the user interface. It’s really nice to be able to track the progress of your compression job while it’s running. Conventional C libraries have to make do with callback functions or inflexible standardized routines in order to provide feedback, but C++ offers a better alternative through the use of virtual functions.

The ZlibEngine class has two virtual functions that are used to create a useful user interface: progress() is called periodically during the compression or decompression process, with a single integer argument that tells what percentage of the input file has been processed. status() is called with status messages during processing.

Both of these virtual functions have access to the ZlibEngine protected data element, m_AbortFlag. Setting this flag to a non-zero value will cause the compression or decompression routine to abort immediately. This easily takes care of another sticky user interface problem found when using library code.

I wrote a simple command line test program to demonstrate the use of class ZlibEngine. zlibtest.cpp does a simple compress/decompress cycle of the input file specified on the command line. I implement a progress function that simply prints out the current percent towards completion as the file is processed:

Since class ZlibEngine is so simple, the derived class doesn’t even have to implement a constructor or destructor. The derived version of progress() is able to provide user feedback as well as an abort function with just a few lines of code. zlibtest.cpp is in the zip file linked to at the end of the article.

To provide a slightly more complicated test of class ZlibEngine, I created a 32 bit OCX using Visual C++ 4.1. The interface to an OCX is defined in terms of methods, events, and properties. ZlibTool.ocx has the following interface:

(Note that I chose to pass status information from the OCX using a property, not an event.)

ZlibTool.ocx is a control derived from a standard Win32 progress bar. The progress bar gets updated automatically while compressing or decompressing, so you get some user interface functionality for free. Using it with Visual Basic 4.0 or Delphi 2.0 becomes a real breeze. After registering the OCX, you can drop a copy of it onto your form and use it with a minimal amount of coding.

Both the source code for the OCX and a sample Delphi 2.0 program are available from the links at the end of this article. A screen shot of the Delphi program in action is shown in Figure 5. 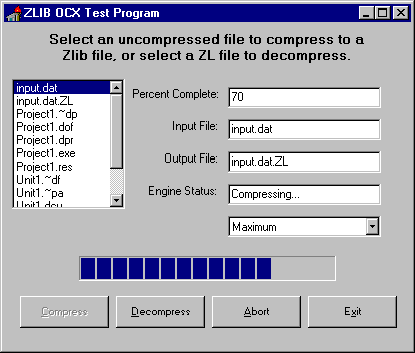 The source code that accompanies this article can be downloaded from this Web page. It contains the following source code collections:

Each of the subdirectories contains a README.TXT file with documentation describing how to build and use the programs.

The source is split into two archives: zlibtool.zip which contains all the source code from this article, as well as he OCX file. zlibdll.zip contains the supporting MFC and VC++ DLLs. Many people will already have these files on their systems: MFC40.DLL, MSVCRT40.DLL, and OLEPRO32.DLL.

I haven’t discussed the zlib code itself in this article. The best place to start gathering information about how to use zlib and the Info-ZIP products can be found on their home pages. Both pages have links to the most current versions of their source code as well:

Once you download the Info-ZIP code, the quick start documentation is found in source file zlib.h. If you cook up any useful code that uses zlib, you might want to forward copies to Greg Roelofs for inclusion on the zlib home page. Greg maintains the zlib pages, and you can reach him via links found there.

zlib can do a lot more than just compress files. Its versatile interface can be used for streaming I/O, in-memory compression, and more. Since Jean-loup Gailly and Mark Adler were good enough to make this capable tool available to the public, it only makes sense that we take advantage of it. I know I have, and I encourage you to do the same.